​Now that the Eredivisie season is over, the next time fans will see Hakim Ziyech in action will be for Chelsea, who have already agreed a deal to sign the Moroccan for £33.3m.

Unfortunately, there’s the small issue of when his first outing will actually be. The transfer is set to go through on 1 July, but Chelsea might still be playing the rest of their domestic season at that point. Ziyech is seemingly not too worried, telling ​AD that he’s relaxed about the whole thing, but fans are less happy and want to see their new signing in action as soon as possible.

There are a few different ways which Ziyech could fit in to Frank Lampard’s side, so let’s take a look at the decisions the boss has to make. Let’s start with the obvious one. The reason ​Chelsea have signed Ziyech is because they were hugely impressed with his performances as a right winger for Ajax. Because of that, many fans have got the impression that Ziyech is a winger, which isn’t strictly true.

There’s an obvious void in Chelsea’s side out wide, with both ​Willian and ​Pedro likely to leave the club when their contract expires, so it seems as though he is most likely to play there. After all, Chelsea learned just how deadly he can be out wide in the ​Champions League when he bagged three assists in the 4-4 draw.

On the wing, Ziyech can bring his creativity, cross-field passes and wand of a left foot, and he’ll also have the license to drift inside and wreak havoc.

As an Attacking Midfielder During his time with both Heerenveen and FC Twente, Ziyech was usually deployed as an attacking midfielder in the hole behind the striker, and even though his stats might not show it, there’s reason to believe that this could be his strongest position.

​Lampard often sets his side up in a 4-2-3-1 formation, with Mason Mount operating in that number ten role. However, while the Englishman has impressed at times, he has struggled to find the creativity to unlock stubborn defences. Fortunately, that’s what Ziyech is about.

In this role in the 15/16 season with Twente, Ziyech managed 17 goals and 12 assists in 33 outings, and it was because of his performances as a ten that Ajax splashed out to sign him.

As a Central Midfielder 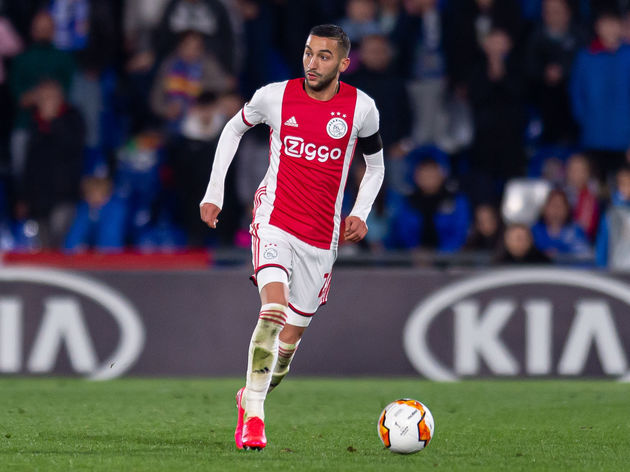 Callum Hudson-Odoi and Christian Pulisic are two young wingers who need game time, and if Lampard chooses to line up without a ten, there might not be a traditional spot for Ziyech on the team sheet.

He would be ideal in a 4-3-3 where he could be shielded by a defensive midfielder like ​N’Golo Kanté or Jorginho. It’s a role which Ziyech has filled in the past, pulling the strings from deep, and it would give him even more room in which to roam.

Playing him at the base of a 4-2-3-1 is perhaps a step too far – his defending is never going to set the world on fire – but against a weaker side who set up in a low block, he could be another creative force.