It seemed as if the Barcelona board thought that getting rid of Ernesto Valverde as manager was going to fix everything wrong with the club… at least, wasn’t it meant to?

The arrival of Quique Setién as his successor hasn’t quite brought an end to the Blaugrana’s issues, with the team seemingly still reliant on individual brilliance from Lionel Messi to just about snatch victories since his appointment.

And as for their off-field problems, the emergency signing of Martin Braithwaite from Leganés really wasn’t ideal. It remains to be seen if signing the Dane will work out for the club; but then again, the Spanish champions shouldn’t need to use a long-forgotten about clause to find a striker. The ​turmoil within their boardroom doesn’t bode well either for the Catalans, who currently look in disarray and need to resolve all of their issues as quickly as possible.

With that all being said, they’re still currently leading La Liga ahead of Real Madrid. But if they can address the various deficiencies in their squad this summer, then they can ensure the Spanish top-flight crown can remain theirs for the long-term, as well as pushing for a sixth Champions League title.

So, here are four crucial positions in which Barça need to strengthen in the summer window, along with who they should target for each role. It’s fair to say that the ​Blaugrana have not successfully replaced Dani Alves at right-back since he departed in 2016.

While ​Sergi Roberto has filled out the right-back spot admirably, he’s a much better fit in a central midfield role. And as for ​Nélson Semedo, he’s had his moments, but there’s certainly been too many times where he’s been caught out of position by opponents.

Whoever comes in will need to be comfortable in possession, as well as being able to track back – just after they’ve provided an overlap to the forward in front of them. Ricardo Pereira has been excellent for ​Leicester since he joined from Porto, and it wouldn’t be a surprise if the Catalans chose to replace Semedo with his countryman.

It would be unlikely for ​Manchester City to give up on João Cancelo after just one year, but then again Inter and Juventus both did, so a move to Barça wouldn’t be a complete surprise.

Of course, the club could pay €9m to bring over Emerson, a player that they share ownership over with Real Betis. He’s contracted there until 2021, with the Catalans having an option to buy him then, yet his form could persuade the club to bring him over to Camp Nou a year earlier than planned. With there being only three senior centre-backs currently on the Blaugrana’s books, buying another one should be seen as a key priority.

​Gerard Piqué has been a magnificent servant for the club, but is now 33 and may not be able to maintain his high standards for long. And while Clément Lenglet’s position looks secure in the backline, the same can’t be said for Samuel Umtiti, with his departure ​looking likely at the moment.

The on-loan Jean-Clair Todibo has looked good for Schalke 04 since joining in January, but is probably a year away from being considered for the first team, and needs another year of development. The German side will probably trigger his option to buy if he’s that good anyway.

It looks like Barça will have to splash out on another centre-back, given that they’ll need to replace the outgoing Umtiti, as well as the ageing ​Piqué. The best current centre-back the Catalans could go out and sign would be Napoli’s Kalidou Koulibaly, who looks likely to depart Gli Azzurri sooner rather than later.

Another of Serie A’s top defenders, Alessio Romagnoli could be on the move in the summer, and would be a strong presence at the back for the Blaugrana, who were recently linked with the 25-year-old.

If looking for a long-term stalwart, Dayot Upamecano has been impressive for RB Leipzig this season and would fit in well with Setién’s possession-style football.

And closer to home, there’s also Diego Carlos to consider, with the Sevilla centre-back playing a key part of Los Nervionenses’ push for Champions League football this season. Much like many of his predecessors, Setién likes to play with a midfield trio, tasked with keeping possession while being mobile enough to move all over the pitch.

And while Arthur, Frenkie de Jong and Sergio Busquets all look to be part of the manager’s plans going forward, the ageing duo of ​Arturo Vidal and ​Ivan Rakitić will likely be parting ways with the Blaugrana this summer. The club seem keen to bid farewell to them, along with the on-loan Philippe Coutinho, in order to find new recruits.

Of the current youngsters, Oriol Busquets is the ​most likely to make the first-team, but needs more time to develop further beforehand.

The Spanish champions will need to find players who are comfortable with the ball, while also being able to make supporting runs to help both the attack and defence. The Blaugrana have been linked with Fabián Ruiz and could tempt him into coming home from ​Napoli. He would be a great technical fit at Camp Nou and is versatile enough to play in either an advanced or withdrawn role.

With José Mourinho clearly not his biggest fan, maybe Barça could take Tanguy Ndombele off ​Spurs‘ hands? The Frenchman would add a physical edge to their midfield stocks that they don’t have.

And while it’s widely assumed N’Golo Kanté will probably head off to Los Blancos from ​Chelsea, it would be an audacious move if the Catalans hijacked the move and bought him instead. 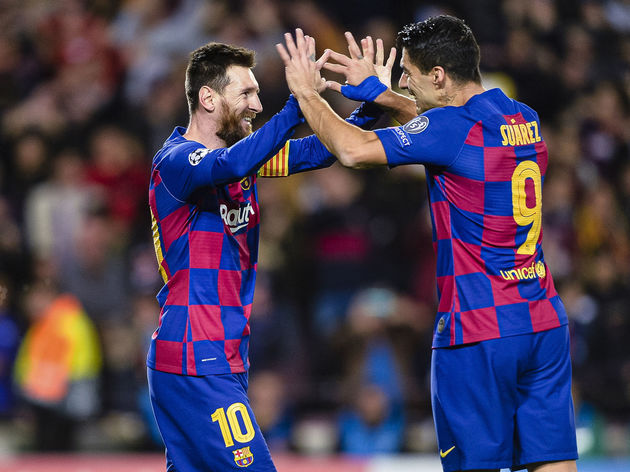 It turns out that having ​Messi isn’t enough to win trophies every season.

The primary targets that Barça seem to be focusing on, is to bring in a third star goal-scorer to help out the Argentine and Suárez. While Antoine Griezmann has been fine for them, his future still doesn’t seem that secure at Camp Nou. Meanwhile, Ousmane Dembélé looks to be on the way out, and who even knows what Braithwaite will produce for the Blaugrana.

The club hierarchy seems determined to add a big-name forward this summer who can gel with the aforementioned South American duo and can score a shed-load of goals. The name that’s been heavily linked to Barça is Lautaro Martínez, and to his credit, he easily has the quality to come in and prove to be a key player from the off.

Of course, it wouldn’t be a normal window for the Blaugrana if they weren’t linked with Neymar. The PSG man came close to rejoining his former team last summer, and given his strong friendships with many at Camp Nou, it looks likely that the Spanish champions will try again to bring over the Brazilian once again.

With the two South American targets likely to cost eye-watering fees each, it leaves very little left for any other attacking targets. Yet if moves for either were to break down, Barça could look to sign Valencia starlet Ferran Torres or in-demand striker Timo Werner from RB Leipzig as alternative options.