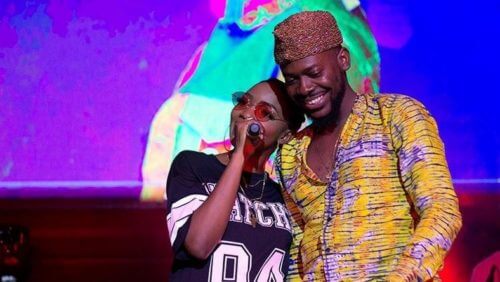 Singer Adekunle Gold has pleaded with God to bless his unborn child with  Simi’s brilliance.

One of the trending videos online at the moment is that of a father scolding his son for failing his exams. It was stated that the father spends about eight million naira on his son’s tuition fees and his outraged dad resorted to hitting him. Adekunle Gold who is expecting his first child with Simi took to Twiter to share his own childhood.

According to him, his childhood was such a cruise as he  only did well in CRK and Fine Art. Some of us, Na CRK and Fine Art we dey pass well for school. lol. My childhood was such a cruise. Simi reacted to the saying Lord, I come to you today. You know the genes we don’t want. Have your way Father. Adekunle then responded he has been praying to God for their child to have her genes. Nor worry I have been praying too. Your genes or nothing.

And mans be talmbout “I’m most likely to pass math…” if you don’t.