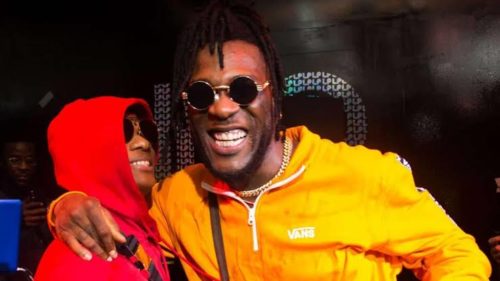 Why would an artiste who claimed to be the best after Fela, the godfather of Afrobeat, hype someone considered to be the messiah of Afrobeats like a king? Does this make any sense? or does Burna Boy want something?

Let’s take a trip down memory lane, shall we? Burna made the headlines a few months ago when he bragged about being the artiste to pave the way for other artistes. He clearly and boldly stated that he was the best after Fela and that the respect other artistes are getting from the westerners is because of his hard work and determination. The man is basically saying he opened doors for everyone.

Lol. NOBODY paved shit for me. Everybody dey find them own. I bin Out here, if you knew the way they made us look weak by begging and paying the western world to like us you will see that no table was set and I’m the one that brought you the Respect you currently enjoy.

Try to remember your reaction to this statement? Were you angered? Excited or neutral? Burna Boy really caused chaos with this statement as music lovers took to social media to bash him. He even lost followers in the process as some fans couldn’t bear to stand a singer with such narcissist behavior-  Burna literally became the most hated artiste overnight.

Wizkid FC were particularly upset and expressed disappointment in the singer. According to them,  Wizkid is the one true artiste who paved the way for Afrobeats and that fact is unarguable. They even considered the singer the next after Wizkid but with his announcement, many felt he was letting his Grammy nod and other international achievements get into his head.

However, yesterday night, Burna Boy did something exceptionally remarkable. He hyped Wizkid before and after his battle against Jamaican singer, Vybez Kartel and even called out his girlfriend, Stefflon Don for supporting the Jamaican singer. Burna also admitted to Wizkid’s debut album ‘Superstar‘ has been the Best so far with great Hits, if he was aware of this why did he disregard Wizkid at first with the saying, No one paved way for me… and Am the best after Fela.

It is no news that the two singers share a special bond as they consider each other brothers but we can’t help but feel that Burna Boy might be up to something.

Why would someone who claims to be the best after Afrobeat King Fela, praise someone like Wizkid like a king? Is this just a strategy to get on the good side of ex fans or Wizkid fans because of his forthcoming album/project?, Add to his army for a stronger force or just get some attention?

I may be wrong though but I can’t shake off this feeling that Burna Boy has something up on his sleeves. Is this just a display of brotherly love or all just for clout? What do ya’ll think?