​It’s March 10, 2007, and the two titans of Spanish football are locked in one of the tightest title races in over twenty years.

With both sides being knocked out of Europe, this was built to be one of the biggest Clasicos in recent history, and it would go on to be one of the most memorable thanks to a stunning performance from a certain Argentinian teenager. 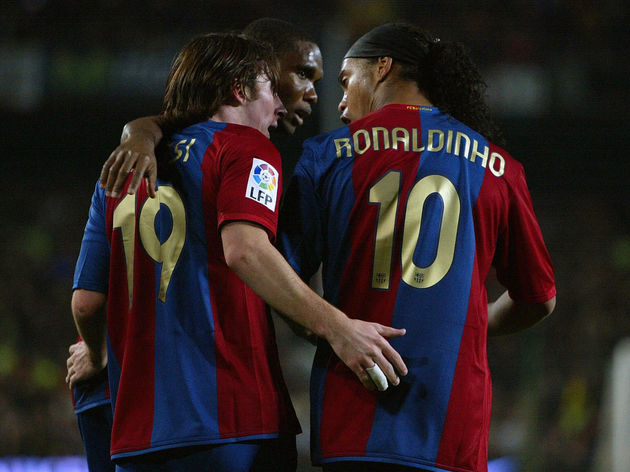 It had been a pulsating 90 minutes, during which Los Blancos took the lead three times thanks to a Ruud van Nistelrooy brace and a Sergio Ramos header.

But in injury time, Lionel Messi – who had already equalised twice – finished brilliantly after a sublime dribble to complete his first Barca hat-trick and cap off one of the great individual performances of all time.

In the space of one evening, football had found its next superstar.

Having suffered two recent league defeats and surrendered their Champions League crown with defeat to Liverpool, the air of invincibility that surrounded Barça was slipping, and they knew Madrid were breathing down their necks.

Having fallen behind three times in the match, they needed something special to get them out of jail and keep them on top. Luckily, they had a 19-year-old Messi, who scored his first by calmly slotting passed Iker Casillas, before smashing in his second after a superb save.

They struggled for much of the second period following Oleguer’s red card in the first half, and with Ronaldinho and Eto’o struggling break down a dogged Madrid backline, Messi needed to step up

Of course, that’s exactly what he did with his brilliant last-minute finish after a trademark run to not only secure his hat-trick, but also become the new Barcelona talisman, and take his first major step into making himself into one football’s all-time greats. Even after everything he has achieved, this was one of Messi’s greatest performances.

Yes the goals he scored were clinical, but every other aspect of his near-perfect game were also on show. His speed, his intelligence,

It was a display that has rightly gone down in history, and was the first of many signs that Barcelona had a genius on their hands.

The Galactico era was coming to an end at Madrid, but they had

They had the perfect start when Lilian Thuram’s botched clearance from a Higuain cross led to a rare Van Nistelrooy goal from outside the box, before the Dutchman converted a penalty to make it This game will forever be remembered as Messi’s Clasico, but Fabio Capello’s side should never have let that happen While Casillas made some outstanding saves, Guti’s ability to control the game was on show here.

He often got Madrid out of trouble by driving the ball forward, drawing fouls, and finding some passes that had no right to be made, and also won the penalty and floated in a beautiful free kick to set up their third goal. Individually, knowing the player he once was, Ronaldinho was disappointing, particularly with his final product. Same goes for future Manchester City forward Robinho – who rather than play in Higuain so Madrid could kill the game – did some fancy stepovers and gave it away.

Finally, the persistent fouling and pettiness really threatened to ruin a fantastic match, with ten cards being shown overall (yeah, standard Clasico fare). Oh, and some of the hair cuts are terrible, with Gonzalo Higuain’s mullet in particular need of calling out.

Things That Aged the Best Apart from Messi, it was brilliant to see baby-faced duo Andres Iniesta and Xavi running the Barcelona midfield, with their effortless control making the game look easy. Oleguer apparently played 127 times for Barcelona, and hopefully he never played that badly in any other game for the Catalans as he did on this night.

As for Madrid, hands up who remembers Ruben de la Red? The midfielder, who scored for Spain at Euro 2008, fainted in a Copa del Rey game in 2008 – at the age of just 23 – due to a heart condition. He never played another professional game, retiring officially in 2010. Barça lost the title this season on the head-to head rule, and Pep Guardiola replaced Rijkaard as manager a year later.

As for Madrid, they won La Liga on a dramatic final day – not enough to keep Fabio Capello in a job (he took over England next, which went…less well). Bernd Schuster took over and won the league the following season.