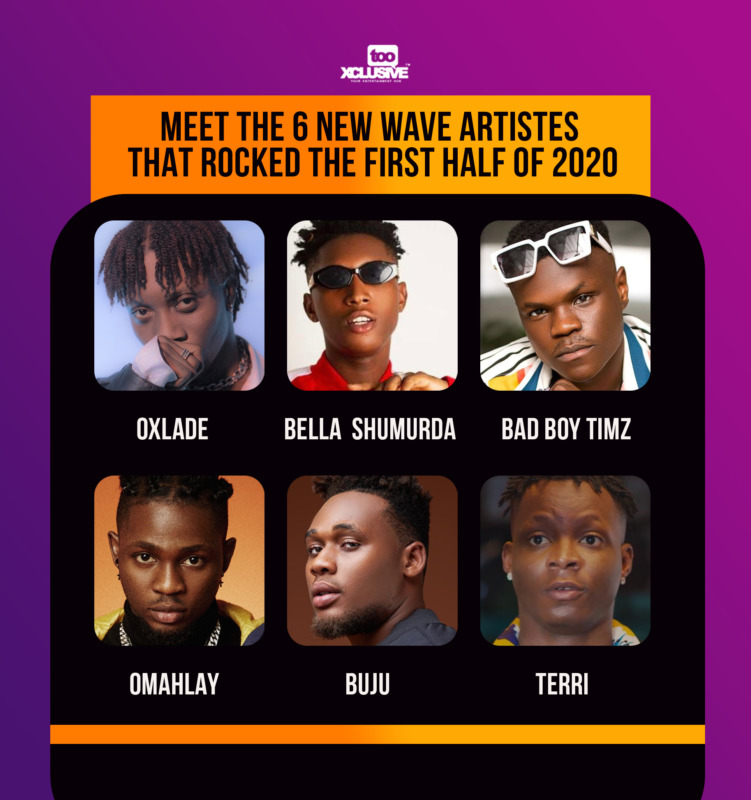 Nigeria’s New Wave Artistes 2020… The music industry is changing faster than it ever has and the is due to the rise of social media and new technologies has opened doors for independent artistes to share their music with ease and still get attention. The traditional norms on culture, identity, and even gender which define the success of artistes have all been redefined.

Due to this, every year we get to see new artistes emerge but only a few are able to make it big. These new artistes influenced by the older generation have studied & learned from them and are ready to take over from them. It’s the first half of the year and we’ve been blessed with music from the new guys (The New Waves).

Nigeria’s New Wave Artistes 2020, It’s July a suitable time to bring a list of these artistes that have shattered our speakers with their music so far. In this article, we would be highlighting 6 New Wave artistes that rocked the first half of 2020 (January – June).

Kuforiji Abdulrahman Olaitan has been singing since he was 10 but his big break came in 2018 from a collaboration with Nigerian rapper Blaqbonez. “Mamiwota,”. Heavily inspired by a lot of artistes while growing up, the singer is one of the new acts that has changed the face of the Nigerian music industry.

Even after studying History and International Relations at the Lagos State University, (LASU), he didn’t let his love for music water down. In 2020, Oxlade won the hearts of many with the release of his 6 track debut EP “Oxgene,” a project filled with the best love songs released this year. The critically acclaimed project brought out the singer in another light and fans were able to see him fuse sounds, bend genres and of course stir feelings.

Born Akinbiyi Abiola Ahmed, the Lagos-born artist rose to prominence with the release of “Vision 2020”an impressive track which talks the struggles of adulting in this century. Later in the year, the singer released the remix which features YBNL boss, Olamide.

Further marking his name in the industry, the singer released his 6 track debut Ep ‘High Tension” which houses his previous hit singles; ‘Upgrade‘ & ‘Vision 2020‘ featuring Olamide and new hit tracks; “Ginger Me” “Sho Mo Mi” and “Omnipotent”. This body of work was loved by many.

Born Olorunyomi Oloruntimilehin, the singer is a student of Bells University where he’s currently studying Computer Engineering. He caught the eye of netizens with his skits and freestyles for which he received nods from industry giants like British rapper, J Hus .

Early in 2019, he signed a deal with Anonymous Music and has released a couple of singles under the label. His 2020 break out single “MJ” has been rocking the music industry and its still gathering massive streams daily. The singer followed up the success with two remixes which features DMW act, Mayorkun, and Dr Dolor singer, Teni respectively. Timz is one of the next rated artistes and fans can’t wait for what he would be dropping next.

Born Stanley Omah Didia, Omah Lay is music royalty. The singer was born to a family with deep musical roots in Port Harcourt, Nigeria. His grandfather was a percussionist for the legendary Highlife singer Celestine Ukwu until his death in 1976. His father also took up drumming though didn’t reach the heights of his father but he was regarded a local hero.

The singer got his big break with the release of “You” which was released on the 14th of February, 2020.  After months of experimenting with sounds and building up a core fanbase, Omah Lay delivered the record-breaking debut EP “Get Layd” which houses tracks like “Bad Influence,” “Damn,” “Ye Ye Ye,” “Lo Lo” and “You“. All tracks on the EP have continued to top charts with digital stores for months and the EP is one of the most streamed projects this year. Omah Lay’s music is deeply Afro-Fusion – the melody of Wizkid meets the depth of Burna Boy.

Daniel Benson, popularly known as Buju or BujuToyourEars in full, piqued the interest of music lovers after the release of “Spiritual” in 2019 and has been on an upward trajectory since then. Buju stated his career as a Soundcloud artiste but it didn’t take long for Nigerians to discover him on the popular freemium streaming platform.

His request for Zlatan to feature on his song, ‘Spiritual’ went viral. By the middle of 2019, Zlatan finally agreed to feature on the track and the song was warmly received by Nigerians. Later in 2019 Buju released a single ‘L’enu which earned him an African Giant signature. Making his debut as a newly signed Spaceship artiste, Buju released the remix of “L’enu” featuring Burna Boy and the track was received with a warm reception.

Last on this list is Starboy Terri. Terry Akewe, Born on 27th of May 1999 in Lagos, Nigeria popularly known as Terri, is fast becoming a force to reckon with as a singer, songwriter and performer. The young star who was introduced to the world by Wizkid official on the song ‘Soco’ kicked start 2020 with the release of his Lead single ‘Ojoro’ and debut album ‘AfroSeries’.

Terri’s 2020 debut and Lead single ‘Ojoro‘ did the magic for him, the song got him more fan base, attention and of course a space on this Best 6 New Wave Artistes that rocked first half of 2020 list. The Wizkid protege proved to all he is ready to take over the future of Afrobeat with his debut EP (music project). The body of work which houses 7 tracks has it tracks all over music lovers playlists.

Among the numbers of new acts (artistes to watch-out for) out there working hard to get a voice and make a name amid our Big known Nigerian singers, These above listed 6 singers have stormed the music industry (this year) within a short period of time and established themselves as the New Waves.

Having Oxlade, Bella Shmurda, Bad Boy Timz, Omah Lay, Buju and Terri on this list, Who Are You Picking As The Best? Who Would You Place Your Bet/Money On As The Next Rated Act for 2020?

Share you pick, take and thoughts about these new guyz (New Wave) with us in the comment section below.