Die Borussen have had fluctuating fortunes in the last decade. At the start they seemed to be building a team to dominate the Bundesliga again, like the famous team of the nineties.

But having sold the majority of their best players to their European rivals for large sums, they have had a period of rebuilding, which now finally seems to be coming to fruition, as the next crop of talented youngsters from around the world emerge from the shadows of legends gone by.

With this is in mind, we have attempted to compile an XI of the best players to play for Dortmund, but with one challenging filter added. We can only have one player per country, and therefore can only pick one German….wish us luck.

Special mention goes to the many who haven’t made this XI. We could comfortably fill a subs bench with them. Have a gander at the 11 we ended up with. Sokratis Papastathopoulos was a regular and successful fixture in the Dortmund side for five seasons. Forming a formidable partnership with Mats Hummels, he helped the team finally end the trophy wait when they clinched the German Cup in 2017.

He is arguably the best Greek footballer playing in Europe (he hasn’t got a huge amount of competition to be fair), but has not looked the same player since his move to Arsenal. Probably because playing alongside David Luiz instead of Hummels is a bit of shock. ​The man who Sokratis replaced in the heart of the Dortmund

He played nearly 200 games for BVB and was a fans favourite for his tireless work, loyalty and professionalism. I can’t tell you how hard it was to pick a German for this XI. Commiserations to messers M 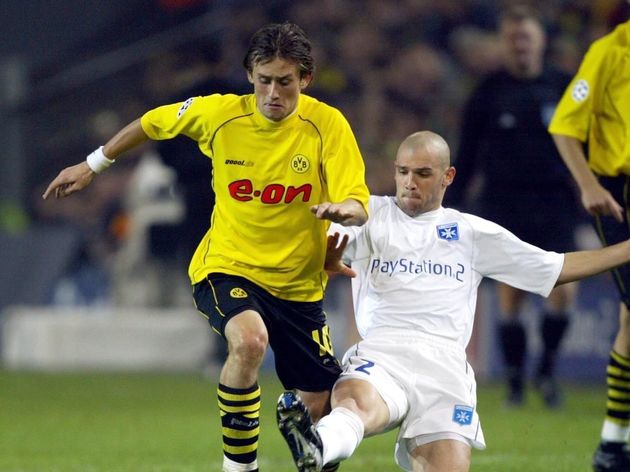 ​The Little Mozart, so called because of his ability to orchestrate the midfield with grace. Bundesliga

any team better. Arsene Wenger was a huge admirer and the Czech playmaker left for Arsenal in 2006 – where he spent the remainder of his career. The best English talent in a generation? Hard to argue against Harry Kane’s goalscoring record but at 20 years old, Sancho does already look the real deal. Now the main man at BVB after the departures of ​Auba’s record at BVB is extraordinary. In 144 league appearances, he notched 98 goals and after a slow start, has kept up that excellent goal ratio at Arsenal.

His pace and spacial awareness is among the best in Europe, and his ability to play in wide positions as well as through the middle is such a bonus. Fun Fact: He nearly joined Newcastle in 2012. Imagine him linking up with the likes of Paul Dummett & Shola Ameobi. Actually, maybe don’t. What can we say that hasn’t already been said about this guy? In many people’s eyes the most complete striker on the planet, Lewandowski has set the highest benchmark for forwards around the world and isn’t showing signs of slowing down at all.

103 goals for BVB across all competitions in just four seasons is extraordinary stuff. Still going strong for Bayern, he is the model of consistency in front of goal. The best Polish player we have ever seen, and certainly the best Pole to play in the famous Yellow and Black kit.