Footballing world, like many others, has severely been hit by the COVID-19 pandemic. Almost all major leagues have been postponed for now as measures are being taken to contain the spread of the virus that has disrupted normal life.

Many countries have already imposed lockdown, and many campaigns and challenges have been put forward to encourage staying at home, while also making the time spent inside less tedious.

​Juventus superstar ​Cristiano Ronaldo had also recently come up with a Living Room Cup, where he, in a video, challenged others to step up and beat his core crusher record. Ronaldo had registered 142 ab reps in just 45 seconds.

The video has since gone viral on Instagram, and has already clocked more than 29 million views. Many have already taken up the task. Ronaldo’s Portugal teammate and Manchester United’s January signing, Bruno Fernandes took part in the challenge and recorded 117 abs in 45 seconds, falling short of what Ronaldo had achieved by 25. 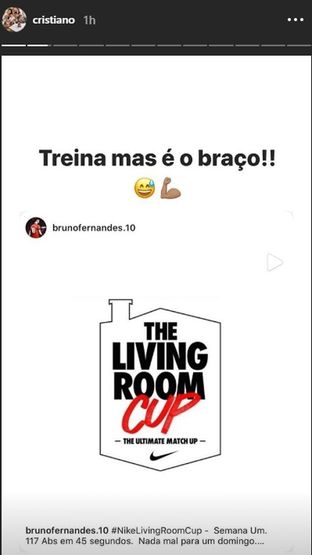 Ronaldo took it to Instagram posting Bruno Fernandes’ story, with a cheeky quip. “Train your arms instead!,” the Juventus forward wrote.

While Ronaldo was not that impressed by Bruno Fernandes’ achievement, Borussia Dortmund youngster Erling Haaland was hailed by the Portuguese. The 19-year-old registered 142, just three shy of Ronaldo’s, in the core crusher challenge. Ronaldo re-posted it on Instagram with the fist and bicep emoji.