​​Manchester United legends Roy Keane and Cristiano Ronaldo are amongst the legendary names to feature in ESPN’s best ​Premier League XI of all time.

Famed journalist Mark Ogden revealed the players that made the starting XI and those that secured a place on the bench, as well as the manager leading the team from the dugout.

ESPN‘s all-time Premier League XI is lined up in a 4-1-2-3 formation and features Peter Schmeichel in goal.

According to the publication, the likes of Petr Cech, David Seaman and Edwin van der Sar were “huge figures during the Premier League era.” However, none as influential as Schmeichel.

Alan Shearer, who is the Premier League’s all-time record scorer, is leading the frontline with Aguero and Ronaldo either side of him.

Legendary former United boss ​Sir Alex Ferguson has been named the manager of the team, with ESPN saying he “built a series of successful teams and saw off all managerial rivals.”

The publication also suggested that the Scotsman’s “only challenge with this team would be picking a captain.” 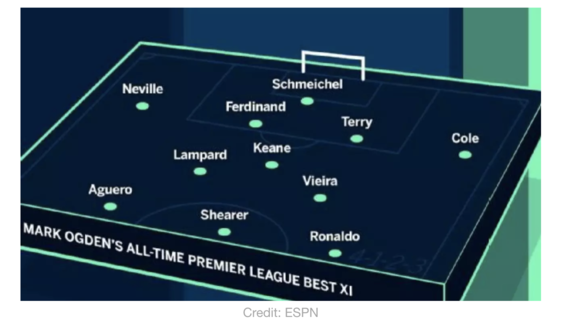 Shocked to see Trent Alexander-Arnold there in subs, aren’t we?