A one-club man is hard to come by in this day and age. Success in football is quickly followed by blinding media attention, and once one of Europe’s big boys sink their teeth into your star man, very seldom do they let go of their target.

One player who was able to stay true to his dreams was Francesco Totti. The Roman-born forward had only one ambition as a child – to play for AS Roma. And he realised this dream. 786 times.

Totti never tired of pulling on I Giallorossi’s famous shirt, and he celebrated every goal in front of the Curva Sud as if it were his last. And he bagged 307 of them, too. But it wasn’t only his goals that earned Totti the nickname ‘the King of Rome’. 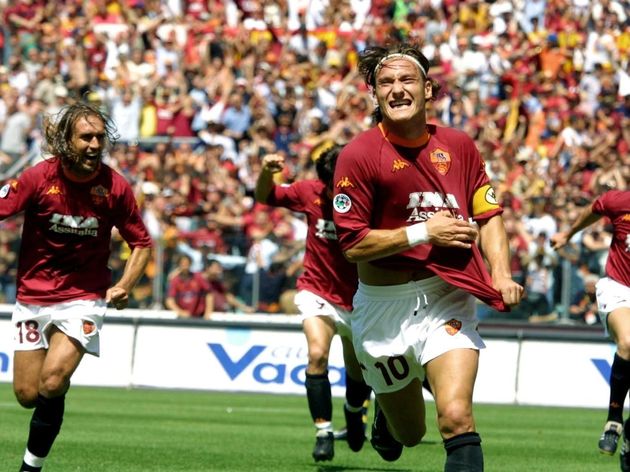 ​If you had to pigeonhole the Italian star to a particular position, which would you pick? Frankly, I’ve stitched you all up there, because there is no right or wrong answer. Totti was a striker, he was a trequartista, and he was a playmaker. His creativity was as valuable as his clinical finishing, and he would pop up anywhere on the pitch to dictate proceedings.

Totti’s ability to see round corners and deliver inch-perfect passes whilst facing in the opposite direction is incomparable – mainly because no one else would even bother to try it. The master of the back-heel, the difference-maker, the defence-splitter.

This was what made Totti great.

And with Sky Italia deciding to honour today as #TottiDay, 90min has followed suit, taking a look back at the best non-goalscoring moments that Totti gifted us during his long and sensational career.

This is absolutely vintage Totti. Collar up, captain’s arm band in place – the works.

Picking the ball up near the halfway line against ​Milan, the Roma number 10 glides towards the right flank, and in the blink of an eye he breezes beyond two tackles with a shimmy and a cut inside.

But he wasn’t finished. Totti then clips a gorgeous flighted ball into the box with his ‘weaker’ left foot, and Paulo Sergio nods home to round off a sensational move. That’s what he’s all about. Have a gander ​here.

Can you imagine even dreaming up this type of pass? It’s difficult to describe in words, but let’s give it a crack. Totti is the master of the first-time ball, and he invented his very own move to cut Parma to ribbons in 2013.

The ball is on the left-hand side, and it is pinged into the number ten midway inside the Parma half. Now comes the hard part. The pass arrives slightly behind Totti, and in an instant he has found a solution, swivelling and contorting his body to perform an unthinkable backheel, whilst twirling in a 360 degree spin to provide the perfect trajectory and angle on his pass.

Sure enough, the ball is propelled into the path of his onrushing teammate, completing the most audacious one-two in football history. A work of art.

Marvel at it ​here.

[Editor’s note: this piece actually came out a little late because I was watching this pass on repeat and got distracted] How many players attempt to pull off an overhead kick when they’re going for glory? And how many execute them correctly? The answers to those questions are ‘too many’ and ‘hardly any’ respectively.

But Totti managed to pull off the most selfless overhead kick against Fiorentina in 2006, using his acrobatic skills to set up a teammate with a golden scoring opportunity. With his back to goal about 25 yards out, Totti received a bouncing ball at chest height, and without a second thought, he flung his legs into the air.

Meeting the ball with frightening accuracy and timing, Totti delivered a stunning acrobatic pass which cut the Viola defence wide open, picking out an unmarked Mancini. Unfortunately, there was no goal at the end of it, possibly because Mancini was so shocked that he’d actually been found in such brilliant fashion.

Enjoy it in all its glory ​right here.

A through ball of mind-boggling proportions. The ball is played into Totti’s feet, and stood about 40 yards from goal, the Italian magician nudges a boot in the direction of striker Fabio Junior. Despite offering zero back-lift, the pass flies into the air, catching the entire Reggina backline completely off guard.

As the ball comes down from orbit, it lands in the penalty area and directly into path of Junior, who calmly lobs over the goalkeeper and into the net. Unbelievable technique. Possibly Totti’s best ever individual display. Italy faced France in the final of Euro 2000, and there was so much to love about this talented Nerazzurri side. Totti was the jewel in Italy’s crown, and he set about ripping the French apart over the course of the following 90 minutes.

The number 20 laid on a number of gilt-edged chances for his wasteful teammates, but they did capitalise upon one of his moments of magic early in the second half. With his back to goal on the right of the penalty area, Totti drew two players towards him, before conjuring a delicious back-heel, wiping out France’s entire left flank.

​The ball was subsequently delivered into the box and Marco Delvecchio simply couldn’t miss. Italy would somehow snatch defeat from the clutches of victory in extra-time of this final, but Totti was so good that he was still named Man of the Match.

Even in defeat, Totti was head and shoulders above the rest. Witness it ​here.