The Derby della Mole might not be Italy’s most competitive rivalry, but it’s still provided Juventus fans, Torino fans, and neutrals alike, with plenty of memorable moments and drama for over a century.

You can find an overview of that derby ​here, but for now, let’s take a look at five of the most notable clashes between Juventus and Torino.

Before ​Serie A, there was the Prima Categoria, which consisted of a complicated series of regional divisions that was thankfully abolished in 1926. This was the infancy of Italian football, long before the advent of Catenaccio, a strongly defensive style of play that still defines Italian football to this day.

As such, there could sometimes be a high number of goals in a match. In the 1912-13 season, Torino had already thrashed ​Juventus 8-0, with La Vecchia Signora struggling in the Piedmont regional division. This didn’t deter Juve though, and they returned for the second leg with a lot more fight.

Torino were 4-0 up after just 12 minutes, with a repeat of the earlier fixture looking inevitable. Juve’s Billy Ayers got a goal back eight minutes later, before Charles Comte scored their second just before the half-hour mark. I Granata got two more goals prior to half-time, seemingly putting the game out of sight.

Juve’s Alberto Bodo scored an own-goal shortly after the beginning of the second-half. La Vecchia Signora weren’t about to give up though, scoring three goals in the space of nine minutes, making it 8-5. Vincenzo Poggi scored Juve’ sixth eight minutes before full-time, ensuring the attackers went home with their heads held high. With a total of 14 goals scored, it remains the Derby della Mole’s highest-scoring fixture, a record that is unlikely to ever be beaten.

Despite domestic success for Juventus throughout the 70s, they were somehow unable to beat Torino for nearly six years during that period, going winless in the derby between 1973 and 1979. In that same amount of time, Juve won three Scudetti.

It wasn’t just a case of bad luck. Torino were a top Serie A side during the 70s, even collecting a Scudetto in 1976. Still, the fact Juventus couldn’t beat their fierce rivals was a stain on their otherwise near-perfect record.

Then came Antonio Cabrini, a Juve legend and one of the world’s greatest left-backs. It was March 1979, and a 0-0 draw between the two Turin sides was looking likely. In the 82nd minute, Cabrini thundered the ball – from outside the penalty box – into the bottom corner, sealing a much-needed derby win for La Vecchia Signora.

1983. This was the year where Juventus were at the height of the powers, having won two league titles in the last three years and boasting a squad which included the likes of Michel Platini, Gaetano Scirea and Paolo Rossi.

Torino, on the other hand, had entered into a slow decline since their Scudetto win in 1976, and were now a solid mid-table side. Safe to say, Juventus were probably expecting to beat their rivals.

It was business as usual for much of the game. Rossi had put Juventus 1-0 up after 15 minutes, before Platini scored a penalty rebound 25 minutes before full-time. It was certainly appearing that Juve were coasting to yet another derby win.

Then something unbelievable happened. Torino’s Beppe Dossena got one back five minutes after Platini’s goal, before substitute Alessandro Bonesso got the equalising goal two minutes later. 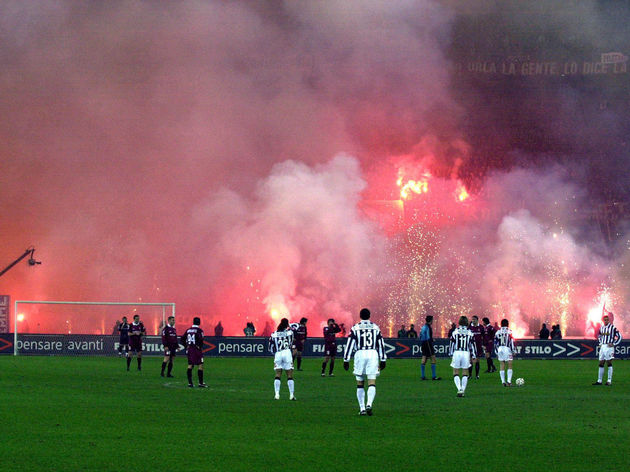 Earlier in the 2001/02 season, Torino and Juventus played out a thrilling 3-3 draw. Juventus were 3-0 up at half-time, but Torino, who had just been promoted from Serie B, got three goals back in the second-half, securing a historic derby result.

So Juventus, who were one of the dominant clubs in Italy at the time, were probably keen to ensure that they wouldn’t be humiliated like that again. The return fixture started well for Juve, with David Trezeguet putting them into the lead within ten minutes.

I Granata pulled one back in the second-half through Marco Ferrante, before they put themselves into the lead with just ten minutes to go after a Benoit Cauet strike. With this, i

Just one minute before full-time however, young midfielder Enzo Maresca scored an equalising header for Juventus. His celebration of the goal attracted controversy, however, as he mimicked Torino’s Riccardo Maspero’s earlier “bull horn” celebration (a bull is Torino’s symbol),

Prior to this 2015 league clash, Torino had not won a derby for over 20 years. I Granata had experienced financial problems and eventually bankruptcy in the mid-2000s, but by 2015, they were once again an established Serie A side.

Juventus, on the other, had just won their third consecutive Scudetto and were, by quite some distance, the most dominant side in Italy. As a result, Torino had failed to collect even a draw since their return to the top-flight. So expectations that I Granata would avoid a defeat when they faced Juve in April 2015 were low.

Regardless, it was a tight affair. Andrea Pirlo put Juventus in the lead through one of his trademark free-kicks in the 35th minute, but Torino’s Matteo Darmian got an equaliser just before half-time to give I Granata a fighting chance.

12 minutes into the second half, former Juventus striker Fabio Quagliarella got Torino’s second with a tap-in. I Granata were able to hold on to that lead, securing their first derby win in over two decades.