Nigerian singer, social activist and politician, Banky W has been attacked on Twitter for calling on the assistance of the Nigerian Army to help coordinate the people of Eti-Osa where they’re distributing food to over a thousand Nigerians who presently might not have means of providing for themselves consistently considering the present lockdown due to the coronavirus pandemic.

Banky W had gone on Twitter on the 21st of April to ask for the assistance of the Nigerian Army as controlling a crowd of over a thousand Nigerians is no small feat. This request is presently receiving mixed reactions as Twitter users speak against using the Nigerian army due to their history of physically harassing any Nigerian who acts contrary to their commands. According to these Twitter users, this request is a bad idea as people might be maltreated but other Twitter users who seem to understand the reason for the request opined that contrary to the negative reaction, this path will actually be fruitful as the Nigerian Army is one of the most feared authorities in Nigeria, hence the chances of keeping people in order is higher. 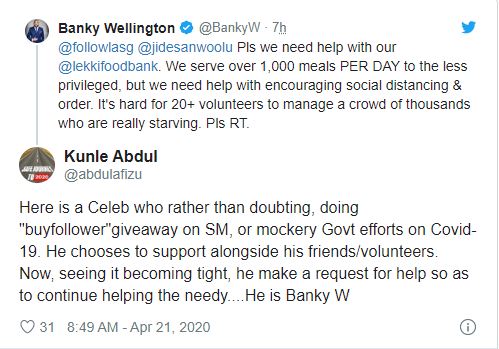 Banky W wants soldiers to come and enforce social distancing before they serve food, is it a relief camp in Vietnam?

Banky W is local tout the military that contributed 80% on Nigerian failures what good can come out from them ? For him to say so means that he don’t know as he claimed to know

Banky W is using his platform, his money& his time to help the vulnerable this period

You complain the Govt isn’t doing enough and here is someone helping.

Sometimes we actually deserve our leaders

I love Banky W, but truth be told; the food items he’s sharing are campaign strategy to be used in 2023. You all thought he’s doing it to help people out of love, it’s a political game. This is how most politicians do before getting to office, showing fake love until they enter.

We dun talk am before. Even if person die for Una. Some pipo go still complain say di person no die well. pic.twitter.com/ExhcmzE2mW

APC boys are the ones defending Banky’s tweet. Lol.
Come 2023 those clowns will still vote for Obanikoro boy again.
Banky W has really tried during this period but you guys should stop pushing him too much.
He made a wrong tweet and he deleted it. Fair enough.
Let’s move on.

How Banky W’s tweet went out of hand is beyond me.

Deep down, you know his intent was good.

Why all the noise? 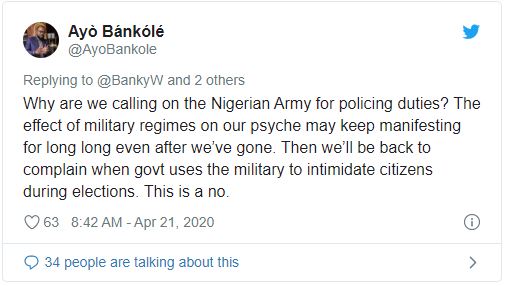