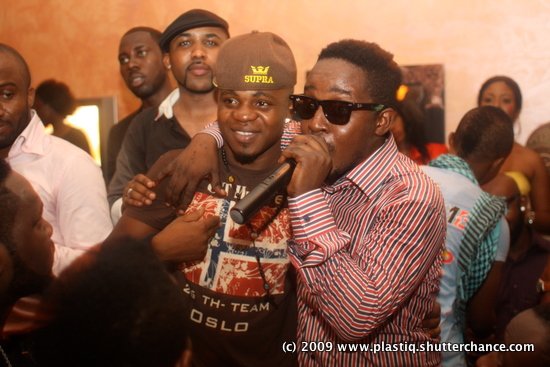 MI took to Twitter to share a very detailed story of his encounter with the late rapper. According to him, he met Dagrin in 2008 after watching him perform  “Pon Pon Pon” before it was released and he was immediately blown away. MI said he had never seen such raw talent and was sure that Dagrin would be the reason why other rappers would go extinct. He added that there would have been no MI2 if not for Dagrin’s “CEO” album.

MI also revealed that he played in a charity football match with the rapper a few days to his death and was devastated when he heard of his death. He went on to call him one of the greatest rappers ever in his book.

In 2008 I was in a conversation with @elbama about some artists he was A&Ring for (YQ and LaLa) and he played me a LaLa song that had a rap verse in it.. I remember playing that record for a friend of mine Sola.. and she just kept laughing during the verses. Every single line and she would pause it.. laugh and try to explain what he was saying.. I was blown away.. I mean who writes verses so good that every line is a quotable..

That December Sound Sultan asked me to perform at his Satellite town end of yr party and I remember sitting behind stage watching Dagrin perform a yet unreleased PonPon.. I was blown away.. this guy was the truth he was going to eclipse every rapper in the game..When PonPon dropped it shook the streets and airways in a way nothing had since Eedris and nothing did again till Baddoo.. the energy.. the flow.. the power in his voice.. this was HIPHOP!!!!! I knew I was a fan an even a little intimidated by the brilliance of this guy..

DJ Neptune asked me to reproduce our 123 record and I remember DaGrin came to my room studio in Palmgrove to record.. simple guy.. talented.. we gisted and laughed the whole time.. spoke about trading collaborations and he hopped on a bike and was headed home..A few months later his album dropped.. without the CEO album there is no MI2.. I was chasing the template he set..something so powerful but so easy for the everyday fan to relate to.. the epiphany came one day sitting in Obanikoro and watching a street dude rap every lyric of his.

By 2009 Christmas he was becoming the biggest rapper in the country.. on every show.. I remember him showing up to an end of year Oil company party with a bullet proof vest on.. his energy consumed the hall that day..I saw him a few days before his accident.. played a charity football game together.. dapped it up.. and everyone went home.. I remember I was headed into Benin for a gig when i heard on radio.. Dagrin was in an accident. Damn.. the country actually stopped..

I don’t know if you guys remember.. but LUTH was packed everyday till he passed.. it spoke to the impact of his talent.. his story.. his charisma.. and his person.. one of the greatest rappers ever in my book.. DaGrin the CEO. 10 years gone but never forgotten!!! RIP 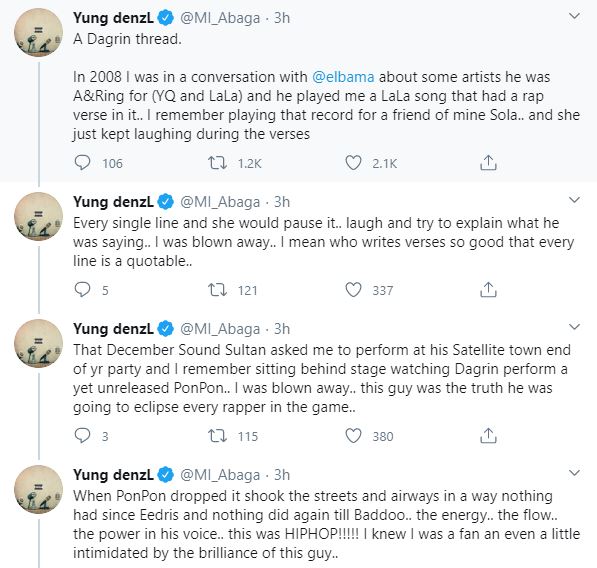 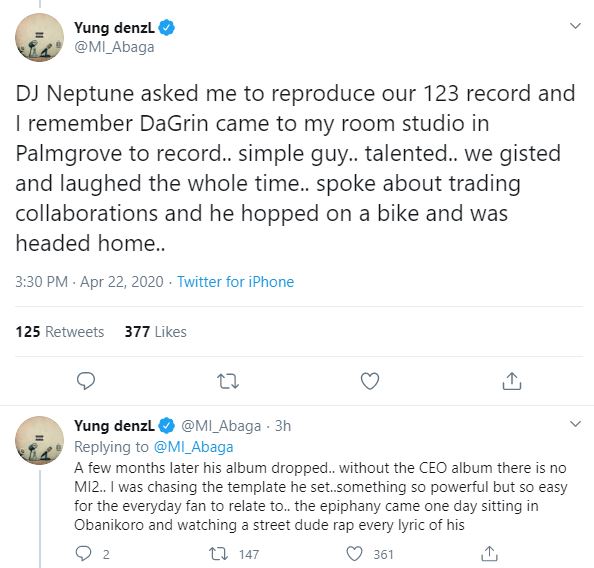 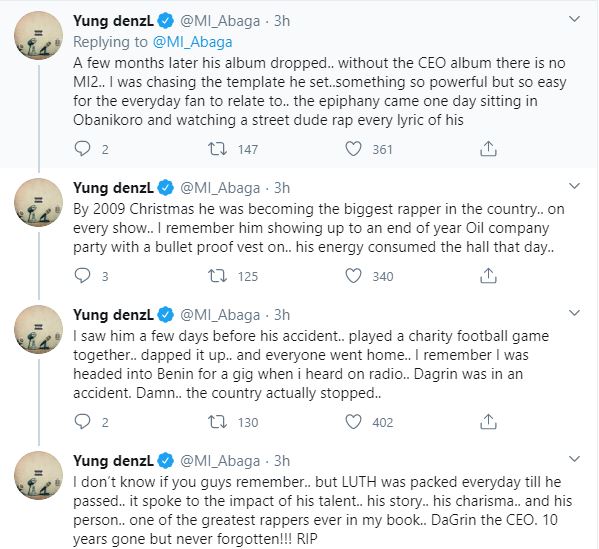