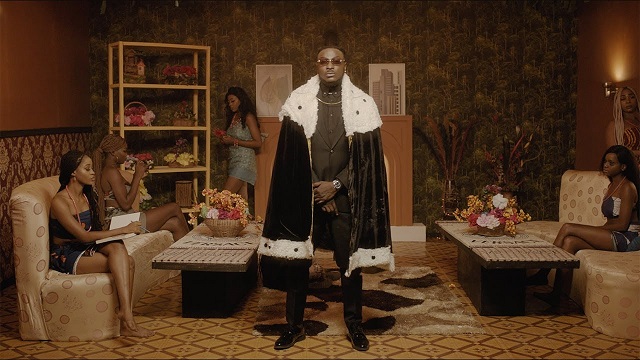 “My name is Okoh Tobechukwu, I have never and will never be a rapist.” This was Peruzzi’s last tweet before he went on a long break. At that moment, the singer was accused of rape and sexual assault for the second time. The allegations leveled against him were quite bad for his image and the only option he had was to lay low for a while.

To others, it was a means to avoid the scandal but to the singer, it was a fight to save his career. However, his hiatus took too long and fans were concerned for the DMW act but it turned out he was doing what he loves the most – making music. On the 6th of August, 2020, the singer released “Lagbaja” which serves as a follow up to his first single of the year “Gunshot”.

Unlike his other tracks, this new tune seems to carry a lot of weight as it addresses controversies Peruzzi has, hanging around him. In this article, we would be giving a break down of Peruzzi’s true intentions with this track and also a review.

Peruzzi’s woes seem to have started when his former record label boss, Patrick Anyaene accused him of breaching their contract. Peruzzi’s nonchalant attitude seemed to have angered Patrick so he went in war mode and leashed out a series of explosive secrets about the singer. He reported that Davido‘s hit songs “Fia“, “Ada“, “Mind“, “Risky“ were all recorded by Peruzzi for his label, Golden Boy Entertainment of which he shared audio proof of Peruzzi singing the hit track “Fia”.

However, things escalated to an extreme level when Patrick insinuated that Davido’s fiancee, Chioma, and Peruzzi (who are supposed to be cousins) are actually lovers. This led to the couple unfollowing each other on Instagram and moments later they followed back. As if that was not enough, a UK-based aspiring singer, Daffy Blanco accused the singer of sexual assault and fraud.

According to the lawyer turned singer, Peruzzi almost raped her and she had to fight him off but ended up getting a scar.  A couple of months later, another rape accusation came in at a time women were opening up about their rape experiences. The lady recalled how she was raped by the DMW record label signee when she accompanied her girlfriend to the musician’s place at Victoria Island, Lagos some years back.

Unfortunately, his old tweets which seem to advocate rape surfaced online and he was caught trying to delete them before they went viral. These series of events caused Peruzzi to take a break from the music scene but he made sure to deny all the allegations against him before leaving. His comeback needed to be a strong one that would cause people to talk and how else can he relay his message – music

Produced by Vstix, Peruzzi delivered his lines on a classic Afro hip-hop beat with drums played. The simple tune comes with a vibe that Easterners would relate to perfectly. One notable feature about this track is about how he passionately sings and is energetic at the same time. His vocals were clear, production and arrangement were of high quality. STREAM

Call Lagbaja..”Hello, hello?” If you can hear me, stop wastin’ my credit… Lagba-ja “Hello, talk nah?” (Ogini ne me nkpo tu a)

The track begins with a recording of a phone conversation where Peruzzi seemingly takes a swipe at Patrick after the whole brouhaha. He tells Patrick who has decided to remain mute during the conversation to speak up since there is nothing more he has to say about him.

After his plan to use the rape incidents to bring him down backfired, Peruzzi tells Patrick to call Fashola as there is road blocked for his rape accusers to get through him. It would interest you to know that Fashola in this concept happens to be the current minister of works and housing and also a lawyer. So two things come into mind, it’s either he’s telling him to call Fashola for legal support or to help clear him the road for his plans to come through.

The keyword here is “ability”. With dis-ability (the rape accusations and nasty secrets) Patrick has given Peruzzi, he probably feels he has the upper hand in this case but Peruzzi says it’s otherwise because it’s actually an ability. He goes on to brag about being anointed with Oil as nothing planned against him ever works out (touch not my anointed and do my prophet no harm).

This part gets interesting. Peruzzi comes out to say he never did it. This statement means a lot as he finally addresses all the drama surrounding him which is the main raison d’être of the track.

On an ending note, Peruzzi would not be the first to address rape accusations and controversy via music. Several artistes before him have done so and many would still do so in the future. But his approach is quite divergent and he has to be commended for his use of metaphors, wordplay in a 2-minute track that addresses his life troubles.

The fact that the song contains deep lyrics that many may not notice on time, he still made sure it remained upbeat and groovy- Huncho style! With the energy he brought into this track, Peruzzi seems to have been reborn music wise and it is evident he’s bringing more explosive stuff to the table. Our fingers are crossed.