​With 136 years of football to analyse, selecting just 25 of the best strikers in Leicester City’s history was always going to be a tough task.

However, here at 90min we relish a challenge and have decided to do exactly that.

Included in the list below are poachers, target men and workhorses – strikers of all different shapes and sizes.

They all have one thing in common though. They’ve all made a significant contribution to one of the biggest football clubs in England.

We want you to recreate Julian Joachim’s famous goal against Barnsley! 

Use #BackYardBelters to submit your goal – it could feature on our video and you could win a 2019/20 adidas home shirt!

After bursting onto the scene as an 18-year-old livewire in 1992, Joachim scored a number of key goals for the Foxes – including a pearler in the 1993 playoff semi final against Portsmouth – before being sold to Aston Villa for £1.5m in 1996.

He’s still playing today at the rip of old of 45 believe it or not, currently turning out for the mighty Bourne Town in the United Counties League Division One. The 13 he scored in the 1999/2000 campaign was a club record in the Premier Leag…until Jamie Vardy came along of course.

Without a doubt the best named striker on this list, Albert Cheesebrough was a clinical forward during the 1960s.

He was also part of the City side that were defeated 2-0 by ​Tottenham in the 1961 FA Cup final. ​This fiery Scotsman had two spells with the Foxes but it was during his first stint at the club where he scored the lion’s share of his goals.

​Dickov endeared himself to the Filbert Way faithful with his tireless work rate but he was also an underrated finisher. ​One half of the dynamic duo that fired Leicester to the League One title in 2009, big Steve Howard was the archetypal target man.

The former Derby and Luton man spent three-and-a-half years at the club, scoring 28 goals -including a vital header against Leeds that secured promotion back to the Championship.

A cult hero who inspired one of the greatest terrace songs in Leicester City history, Iwan Roberts’ goals during the 1993/1994 season helped the Foxes get back into the Premier League.

His best ever scoring campaign came two years later. The Welshman hit 20 goals and was snapped up by Wolves at the end of the season. The Argentine was the club’s top scorer during their first season back in the Premier League under Nigel Pearson, but he will most fondly be remembered for his heroics during the second half of the 2015/2016 campaign. ​Leicester signed cheeky Scouser Nugent on a free transfer in the summer of 2011 – and he would prove to be an inspired purchase.

His energetic pressing and trademark curling finish helped him become a popular figure at the King Power Stadium between 2011 and 2015. ​A born poacher, Fryatt’s 30 goals were a big factor in Leicester’s promotion back to the Championship at the first time of asking during the 2008/2009 season.

Forming a telepathic connection with Steve Howard, the former Walsall man deservedly scooped the League One Player of the Season award.

Another amateur medal saved from the scrap man!

​Turning out for the club between 1907 and 1910 – when they were still known as Leicester Fosse – Shinton experienced his richest vein of form during the 1909/1910 season.

During that campaign, he hit 34 goals in just 42 games to cement his place in Foxes folklore.

Keyworth spent just shy of six years at Filbert Street scoring 76 goals in total – all in the top flight. Hometown hero Emile Heskey was a powerful, skilful forward when he burst onto the scene as a youngster during the 1990s.

His impressive form during the second half of the decade earned him an £11m to ​Liverpool in 2000. The rest is history.

After he retirement, he was appointed as Foxes manager. The club were immediately relegated amid financial uncertainty and boardroom infighting. Lochhead soon become tired of that nonsense and return to Scotland to open a pub. Good on you, sir.

Jack Lee of Leicester City and Leicestershire
Scored twice in his first-ever Football League match and took a wicket with his first ball in County Cricket pic.twitter.com/1Yiit6Sqwy

​​Leicestershire-born Jack Lee was equally talented with a ball in his hands as he was with one at his feet.

As well as playing cricket for his home county, Lee was a prolific scorer for the Foxes in the 1940s, racking up 84 goals in just four Division Two seasons. ​Leicester legend Walsh is perhaps best known as a defender but he was also a useful, auxiliary centre-forward.

His most prolific season came under Brian Little during the 1992/1993 campaign, where he was the club’s top scorer with 16 goals. With his glowing tan, flowing locks and trademark moustache, it’s little surprise that Worthington was a terrace favourite during his time at Leicester.

Grabbing a few goals probably boosted his popularity as well and overall, the forward would score 78 times before departing the club in 1977.

​​Making his debut just after the end of the Second World War, Ernie Hines registered six double figure scoring seasons during his time at the club.

After a glorious 13 year spell with the Foxes, Hines saw out the twilight of his career at Shrewsbury Town and Rugby.

Ever present in the Leicester team during the early 1960s, Scottish star Walsh was ruthless in front of goal.

He averaged just shy of a goal every other game during his seven campaigns and was another member of the Foxes’ beaten FA Cup final team in 1961.

Prior to providing commentary on the FIFA games, Alan Smith was an exciting, young striker for his hometown club.

He notched 84 goals in just five season before being snapped up by Arsenal where he continued to tuck chances away left, right and centre. Leicester’s favourite son scored over 100 goals for the club before embarking on a career that would earn him worldwide fame.

His finest Foxes moment? Not any of his goals, rather when he stripped down to his boxers on live television after the club lifted the ​Premier League title in 2016.

Ernie Hine is The Reds’ all-time top goalscorer with 131 but that isn’t even the most goals he scored for a club, with Hine netting 156 goals for Leicester City pic.twitter.com/fudTJ0piq2

​​Barnsley’s all-time top scorer also grabbed a hat full of goals for Leicester during the the 1920s and 1930s.

Nicknamed The Gunner due to his canon of a left-foot, no one has scored more than Rowley in the history of the English Football League.

The majority of these strikes came while he was at Leicester during the 1950s – where he managed 265 of goals in 321 appearances. He’s also a legend at Shrewsbury. Not a bad career, eh? 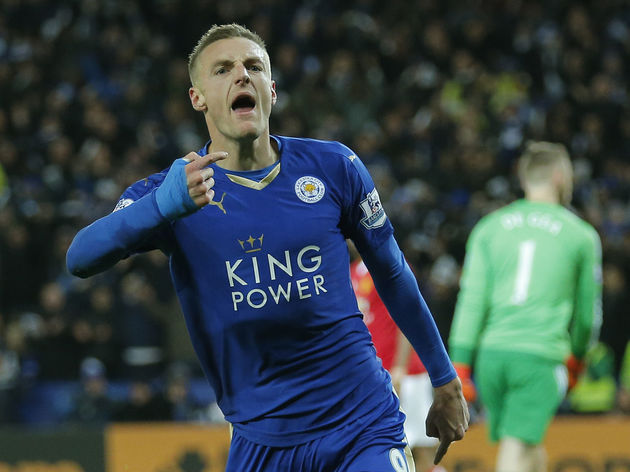 ​Missing out on top spot by the narrowest of margins is the record-breaking, crowd-rustling Jamie Vardy.

Vardy’s rags to riches tale is one of the most compelling in all of sport and his ability to consistently post incredible goal tallies prove that he is a world class talent.

It goes without saying that Leicester’s all-time leading goalscorer has to be the club’s best striker of​ all time.

The Londoner arrived in the east Midlands from QPR in 1923 with little striking pedigree. However, by the time he had left Filbert Street 12 years later, Chandler had amassed a ridiculous 273 goals.